Dara Riva always had a rule that her 10-year-old son could play video games only once a week. But then the COVID-19 pandemic struck, and her perspective changed.

Riva’s son, Maximilian, has cystic fibrosis (CF), making him particularly susceptible to COVID-19 and the complications that can arise from it. As he complies with stay-at-home orders and remains in social isolation during the pandemic, video games have helped him stay connected with the outside world from his home in Frederick, Maryland. 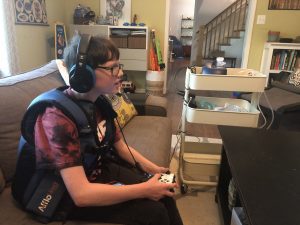 “When we shifted to staying home all the time, we saw the value in him being able to stay connected with friends,” Riva said in a phone interview with BioNews Services, which publishes this website.

That same idea of connecting through video games is more pervasive than ever in the hospital setting because safety concerns related to COVID-19 have left chronically ill patients without child life specialists and fewer visitors.

“We’re hearing from hospital partners that video games are in higher demand than ever,” said Zach Wigal in an email. Wigal is the founder of Gamers Outreach, a nonprofit that provides video games to children’s hospitals. “With the limitation of visitors and restrictions on patient activity, in many places, all patients are being isolated in their rooms.”

With video games, patients can connect with their family, friends, and the rest of the world. Wigal compares online connectivity to a sandbox, where children can interact with each other — only in this modern version, they can play with others around the world.

Guidelines put in place to help slow the spread of COVID-19 have limited the entertainment options typically available to patients, according to Justin Molina, a nurse at Ann and Robert H. Lurie Children’s Hospital of Chicago. The hospital has opened his general medicine and respiratory specialty floor to COVID-19 patients up to age 25.

Services that usually are available for children, such as pet therapy, arts and crafts, poetry, and music, are no longer offered at most hospitals. Nurses and one parent could be the only people a child sees in a day. With everyone keeping their distance for safety, patients are left with their screens and video games.

Video games can be used to help manage pain, boredom, anxiety, sadness, and cognitive impairment, according to Travis Erikson, executive director of the Child’s Play Foundation, which provides toys and visual entertainment to hospitals.

The organization partnered with video game research firm EEDAR and mental health researchers at the University of California San Diego to create a guide, which recommends games that can help with each of these issues. For example, it suggests games such as Mario Kart 7, Fruit Ninja, and Overcooked 2 for children younger than 12 who have physical pain and symptoms of a chronic condition. These types of games are easy to learn, have fast-paced action, and rely on complex visuals. They also can distract from extreme discomfort and pain, symptoms that often plague sickle cell disease patients, for example.

“Because they’re immersive, video games are very helpful for taking the mind off of pain and probably can decrease the need for pain medication,” said Lewis Hsu, MD, PhD, a pediatric hematologist and director at the Sickle Cell Center at the University of Illinois Hospital and Health Sciences System.

For others with diseases like CF who need to be isolated, or patients who are far from home, games are a way to stay connected.

“That decreases social isolation, gives you a peer group of people who really understand what it’s like to be a kid in the hospital,” Hsu said.

At C.S. Mott’s Children Hospital in Ann Arbor, Michigan, J.J. Bouchard, manager of the patient tech program, said video games helped a child from Japan connect with friends from home, and a patient from Kansas was able to play the popular game Minecraft with his brother and sister. In some diseases, such as dermatomyositis, fine motor movement associated with video games can help relieve pain and preserve motor function while minimizing joint swelling, according to Molina.

Apart from recovery, Erikson said virtual reality, or VR, is a promising strategy for guiding children through more minor procedures, such as a port change, as he saw firsthand.

Erikson was visiting a teenage boy at the Great Ormond Street Hospital for Children in London, who got up and out of bed only because he could play the VR game Beat Saber. The boy was so engrossed in the game that he opted to have his port changed while he was playing.

“His mom and the nurses were just overjoyed with how well he did and how much he responded to that opportunity to play a game and getting to feel like he was a kid again,” Erikson said.

Some companies are using VR to help children through procedures such as  getting a shot. Smileyscope, an Australia-based company dedicated to developing VR solutions for pediatric healthcare, designed a diving simulator, in which the needle prick is coordinated with a pufferfish coming up to touch the patient in VR.

Bouchard cautions, however, that VR may not work for other procedures. “You want them to be able to know what’s happening. You don’t want to ever surprise them and you don’t want to ever lie to them,” he said. “To do that with VR is incredibly difficult and counterproductive.”

However, he says, playing something like the Nintendo Switch, where the system is not as immersive and the patient is able to look down at the procedure before getting back into the game, may be an option.

Beyond helping children cope with being in isolation, video games can assist healthcare workers in connecting with patients undergoing uncomfortable, sometimes painful, procedures. Molina even jumps in for a game of Mario Kart every now and then.

“Being able to bring that into the room and build up that relationship with them helps in the long run,” Molina said. “It’s benefited me in terms of my own relationships with a lot of the patients there because we’re able to bond over a common thing that we both enjoy.”

Maximilian visits the hospital about once a year for CF exacerbation treatment and the video games come with him. In one instance, Riva connected him and another boy with CF on a Minecraft server and they communicated over a walkie-talkie.

“It ended up being a really fun time,” Maximilian said, recounting the experience while simultaneously playing a game of Fortnite.

A few seconds later, the victory screen popped up. He and his friends had won.